Switzerland – famous for its rustic villages under majestic Alpine panoramic skies; for aromatic cheeses with holes that are impossibly big, for crispy rösti and fine chocolate; for punctuality and cleanliness. But also for its financial system, its flourishing economy, its numbered accounts as well as its internationality and its neutrality that’s both admired and criticised.

The Prime Tower in Zurich, which was completed in 2011 and is the tallest building in Switzerland, is also typically Swiss – although that’s not the impression it creates at first sight.

Switzerland celebrated a major anniversary in 2015: 500 years of neutrality – that’s half a millennium! A massive achievement in view of the fact that many catastrophic wars have been fought all across Europe during this period, the Thirty Years’ War, for example, and the First and Second World Wars, for instance, just to mention a few – wars during which neutrality couldn’t have been so easy.

The ‘Battle of Marignano’ in 1515 is widely regarded as the point at which Swiss neutrality began. The Swiss lost the bloody conflict, withdrew and from then on kept themselves out of military conflicts but not yet defining their restraint as an official policy. It was only when the devastating Thirty Years’ War came to an end that the Swiss chose to pursue ‘perpetual neutrality’ as a policy of state. 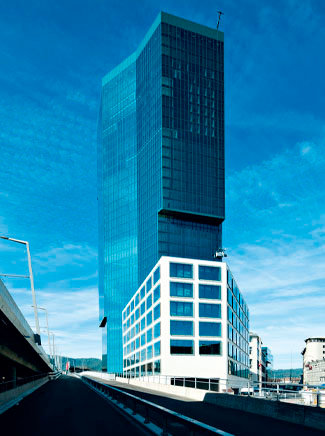 What does all that have to do with the Prime Tower? Well, even this tower, which dominates its urban surroundings in size and rises far above them, is neutral. But is ‘neutrality’ a desirable attribute for an architectural lighthouse project like this? That depends on your point of view. Read on to find out why the Prime Tower has been so successfully neutral.

We first need to take a closer look at Zurich if we wish to delve into the Prime Tower’s background. The city, through which by the River Limmat runs, lives off – and with – quite a few contradictions. Zurich is widely regarded a cosmopolitan city, for instance, but it’s home to just more than 400,000 inhabitants. Zurich is one of the most desirable cities to live in the world – but also the most expensive. Zurich is also Switzerland’s cultural and economic centre because it’s the country’s largest city – but it’s not the capital. (Whereby it must be noted, however, that, in a legal sense, Switzerland doesn’t have a capital as such; but it’s Bern in practice).

Zurich is divided into 12 city districts. District 5 is the centrally located ‘industrial quarter’, which has been undergoing a process of metamorphosis for thirty years. Right up until the 1980s, the industrial quarter did justice to its name: District 5 was home to many big companies working in the mechanical engineering, textile and food sectors. Thousands of workers lived here. But then change happened: companies merged, suffered bankruptcy or relocated – and the industrial quarter became an industrial wasteland. The area has been undergoing a process of transformation since the mid-1990s. Many buildings have been demolished but many that were industrially and culturally significant have also been preserved and incorporated into the new plans.

The site of the former ‘Zahnräder Maag AG’ was a very prominent wasteland. Located close to the railway station, in direct proximity to the tracks, with the important ‘Hardbrücke’ traffic link running close by, the city’s planners were well aware that any new uses for this area needed to be well-considered and architecturally sensitive. Zurich-based architects Gigon / Guyer won an international competition over other proposals submitted from as far afield as Barcelona, Basel, Berlin, Kuala Lumpur and London. The fact that a firm of architects that was based in Zurich won the competition meant that people thought the worst when they first heard the news – but Gigon / Guyer had simply used their local and historical knowledge to their best advantage and presented a building that achieves a balance between spectacle and restraint.

“The tower almost disappears depending on the light.”

The Prime Tower complex consists of four buildings: the Cube, the Diagonal, the Platform and the Prime Tower. Of course, the eponymous tower with its 26 floors and 126 metres is the ensemble’s stand-out object – in the literal sense of the words – but that should not diminish the positive impression that’s also created by the ‘outbuildings’. The Prime Tower by Annette Gigon and Mike Guyer serves as an office and service building with 40,000 square metres of space that’s sufficient for 2,000 workers. The tower is not the representative office for a single company, it’s home to a multitude of businesses – including Citibank, Deutsche Bank, Homburger AG, Switzerland's largest commercial law firm, and the CLOUDS restaurant on the top floor.

What the team around Gigon / Guyer created to this end is remarkable: they merged two rectangles into a building shape that is difficult to grasp. It would be hard to sketch the Prime Tower from memory, as it looks different from each side – sometimes slim and straight, sometimes complex and angled. A greenish glass was chosen for the façade, which sometimes reflects the surroundings and sometimes merges with the sky. This combination of shape and surface delivers the amazing effect that the tower seems strangely discreet and modest in spite of its impressive size – particularly when compared with the urban surroundings. Or, as the two architects remarked in an interview with the Swiss ‘Tagesanzeiger’ newspaper: “The tower almost seems to vanish depending on the light – and then it reappears again.” This restraint and, yes – neutrality – is characteristic of the tower. It satisfies all the architectural requirements that such a lighthouse project must fulfil but still seems unwilling to attract attention or to even ‘brag’.

As you approach the Prime Tower, the unclear shapes and variable reflections transform into clear lines and transparency. The façade elements may be extended to create ever new structures on the surface. Although the glass is reflective, it still permits views inside into the world of work behind it. And once you have approached the building to get close enough to see inside, you can enter it and take the lift 120 metres up. You can then not only dine exquisitely at the CLOUDS restaurant but also enjoy a breathtaking view across Zurich.

The Prime Tower thus constitutes a rare example of how architecture is able to assume a modest air without becoming boring at the same time. Just what you’d expect from something this Swiss.